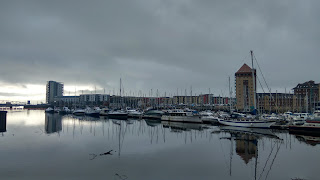 During my UK and Ireland trip I have visited Swansea. Before I started travelling I read an article about the best places to visit in the UK. Swansea was ranked number one. However I have to say it is nowhere close to number one.

During my stay in Swansea I resided in a friend's house in Gowerton, a small town outside of Swansea. The weather was not that good but we had the chance to visit the mumbles and catch a bus ride in order to see the whole sea shore. I have to admit that Swansea has some really beautiful beaches and coves if you compare them with other cities in the UK. However I have not yet visited Cornwall in order to have a complete picture and also if I compare them with those in Pembroke-shire Swansea's will lose.

Moreover I have also visited the city center of Swansea and the Harbor. The city center is nothing special. It looks like a common UK city center which is nothing impressive if you compare it with London, Edinburgh or Dublin. Now when it comes to the harbor. The harbor of Swansea seems like two different ones. The old part and the new one. The harbor is nice but nothing amazing. You can take a walk and take some pictures, then head towards the older part and walk along the coast. After the walk, what we have done was to have a nice lunch at the sky restaurant in front of the harbor. The view was really nice and the food was delicious and the prices were comparatively cheap if you consider that it is a sky restaurant.

Overall, I believe that ranking Swansea as the best city in the UK is an overstatement. However I would recommend visiting Swansea during the summer months but not for many days. Also if you are looking for amazing coastal holidays in Wales I would recommend Pembroke-shire which has a lot more beautiful coastal cities and towns.
Posted by Unknown at 04:18