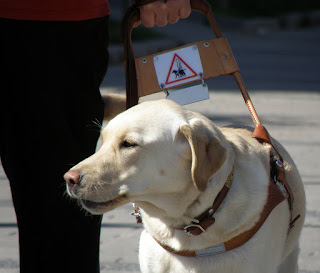 Last night I was in a restaurant in London. Suddenly two gentlemen came in with a dog. I asked my self, ''why is there a dog in a restaurant?'', and then I realized that it was a guide dog for blind people.

It was the first time I have experienced a situation with a blind person and his dog and I felt that I had to write about it.

The two men sat down. Then the person who was not blind took a look at the menu, he ordered for both and then they had their drinks and food. I was looking at the dog and it seemed like a normal dog sitting on he floor quietly waiting for his owner to finish and then they would go for a walk towards home.

After a while I asked the other gentleman, ''why are you holding the dog?'' and he said '' it gets very hard to restrain her when he comes back''. I was confused, the dog's owner was at the bathroom only for two minutes. However, when he came back I realized what he meant. The dog was so happy, but not like a usual dog excitement, something a lot more. When a dog is excited with someones appearance you can see a lot of excitement and happiness but after a while it fades. With this dog it would not stop and it was just a two minute absence and you could also feel the infinite love and care that the dog felt for her owner it was something unique and wonderful to watch.

After some thinking and research I realized the reason for the amount of love and care that the dog felt. It is because she had to guide the person everywhere and he was depended on her and her instincts. She was the being that he was closest to. Bounded by a bond higher than owner and dog friendship and love but a bond of absolute trust, responsibility and care.